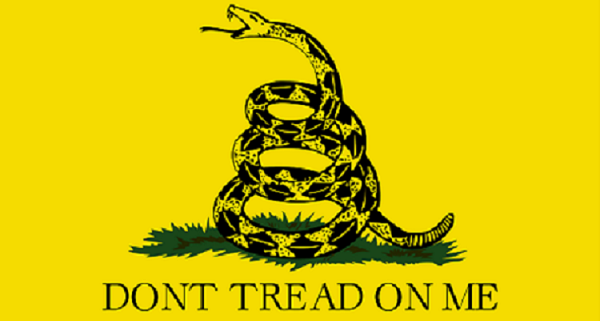 When I was young, a phrase I heard rather frequently was “Don’t make a federal case out of it.” These days, however, you don’t hear that so often, probably because it’s now ridiculously common and absurdly easy for people to “make a federal case” out of nothing more than a gripe – provided it’s a politically correct gripe.

As an example, consider the recent Equal Employment Opportunity Commission (EEOC) case involving a post office worker who complained of illegal “workplace harassment” because another worker persisted in wearing a cap with the Gadsden Flag and its “Don’t Tread on Me” motto.

For those who aren’t aware who Christopher Gadsden was, Christopher Gadsden was an American patriot if ever there was one. He led Sons of Liberty in South Carolina starting in 1765, and was later made a colonel in the Continental Army. In 1775 he was in Philadelphia representing his home state in the Continental Congress. He was also one of three members of the Marine Committee who decided to outfit and man the USS Alfred and its sister ships.  Gadsden and Congress chose a Rhode Island man, Esek Hopkins, as the commander-in-chief of the Navy. The flag that Hopkins used as his personal standard on the Alfred is the one we would now recognize. It’s likely that John Paul Jones, as the first lieutenant on the Alfred, ran it up the gaff.  It’s generally accepted that Hopkins’ flag was presented to him by Christopher Gadsden, who felt it was especially important for the commodore to have a distinctive personal standard. Gadsden also presented a copy of this flag to his state legislature in Charleston. This is recorded in the South Carolina congressional journals:

“Col. Gadsden presented to the Congress an elegant standard, such as is to be used by the commander in chief of the American navy; being a yellow field, with a lively representation of a rattle-snake in the middle, in the attitude of going to strike, and these words underneath, “Don’t Tread on Me!”

What should be a symbol of liberty, patriotic displays and military history is now a petty complaint that we must now pay federal bureaucrats to investigate and resolve.

Back in 2014, a maintenance mechanic working for the U.S. Postal Service in Denver filed a complaint stating that he found the cap “racially offensive to African Americans” because the flag on it was designed by Christopher Gadsden, who, back in the 18th century, was a slave owner and trader as almost half of the attendees of the Constitutional Convention were. USPS management tried to mollify the complainant (called “Shelton D.” in case documents) and said that the other worker would be told to stop wearing the offending cap. But that worker kept on wearing it and, making matters much worse, the USPS then dismissed the complaint on the grounds that it failed to state a “cognizable claim of discrimination.”

So, not getting satisfaction from the Postal Service, Shelton D. did just what more and more Americans now do when annoyed – complain to a federal agency. The agency tasked with making all our places of work free from any actual or imagined discrimination of any sort is the EEOC.

Instead of siding with the USPS that this complaint was much ado about nothing, the EEOC decided that the matter needs further investigation. (The EEOC’s decision is not available online, but you can read its summary of the case here.)

The EEOC states that “After a thorough review of the record, it is clear that the Gadsden Flag originated in the Revolutionary War in a non-racial context. Moreover, it is clear that the flag and its slogan have been used to express various non-racial sentiments, such as when it is used in the modern Tea Party political movement, gun rights activism, patriotic displays, and by the military.”

Nevertheless, the EEOC also declares that the flag is “sometimes interpreted to convey racially-tinged messages in some contexts.” Therefore, the case can’t be dismissed. Rather, the Postal Service must investigate further “to determine the specific context in which (the worker) displayed the symbol in the workplace.” The EEOC insists on having “evidence that would illuminate the meaning conveyed” by the wearing of the cap.

So now the Postal Service must grill the worker to find out just what “meaning” the cap was intended to convey. He might say that he’s just fed up with high taxes and meddlesome government and wasn’t conveying any racially-tinged message to Shelton D. – but how can they be certain that’s all there is to it?

Maybe the Postal Service will again decide that the complaint is groundless and maybe the EEOC will decide that the evidence adduced is good enough for it to drop the case. But however this dispute is decided, the fact that caps, clothing, and other expressions of views in the workplace can lead to regulatory trouble will have an impact on employers.

Volokh explains that the case is about the rules that all employers “must follow on pain of massive legal liability.” Massive legal liability is the crucial point here; no employer (not even the USPS) wants to costs of having to defend against complaints lodged with the EEOC that it has allowed a “hostile work environment” by permitting workers to wear or display anything “insensitive” that could set another worker off.

For that reason, they are apt to adopt rules against any apparel or other means of expression that could possibly lead to complaints about “harassment” or permitting a “hostile work environment.” If employers want to have rules against Gadsden Flag caps, Che Guevara shirts, or anything else, they should be free to make them, but the federal government shouldn’t push them into such rules.

In this dispute, we again see how prescient Alexis de Tocqueville was when he wrote about the danger to liberty he saw back in 1830:

“Society will develop a new kind of servitude which covers the surface of society with a network of complex rules through which the most original minds and energetic characters cannot penetrate.”

We are well on our way back to servitude when companies tell workers what they cannot wear for fear of trouble with our vast regulatory state.