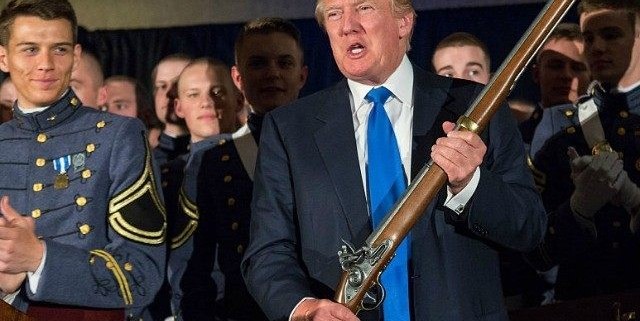 According to CNN while in Sarasota, Florida Donald Trump on Saturday touted his opposition to gun control, the day after a shooting rampage outside a Planned Parenthood clinic in Colorado killed three people.

At a Sarasota, Florida rally, Trump didn’t mention the episode, in which one officer and two civilians were killed. But the mogul did cite the recent Paris attacks, in which more than 130 people died.

“If they would have had the guns, they wouldn’t have had the carnage they had,” Trump told an often-raucous crowd. “I just want to say upfront, right now, Second Amendment 100%.”

The billionaire businessman’s Thanksgiving weekend event came amid mounting criticism over his apparent taunting of a New York Times reporter’s physical appearance. Trump has denied mocking the scribe’s physical disability. The New York Times earlier in the week issued a statement condemning Trump, while the mogul maintains it’s the news outlet that should be saying sorry.

It’s only the latest brouhaha in a campaign filled with taunts and insults of political opponents, media critics and others. Though before the Sarasota rally Trump showed a softer side, at least briefly. After his helicopter landed, Trump called for some children to go up in it, a stunt he pulled in Iowa this summer as well.

“I can call her girl right?” Trump said speaking to the parents of a young child at the rally. “Today we have to be so politically correct.”

An Atlanta news anchor nails it when explaining what the actual purpose of the Second Amendment is and why the Founding Fathers thought it was so important.

Ben Swann, host of CBS 46’s show “Reality Check,” explained on Monday that the right to bear arms isn’t just about hunting or personal protection; it’s about preventing the government turning on its own people.

Swann started off the segment by quoting the text of the Second Amendment:

“A well regulated militia, being necessary to the security of a free State, the right of the people to keep and bear Arms shall not be infringed.”

He explained that much of the modern debate over the intent of the Second Amendment centers around whether or not private citizens should be allowed to own guns. At the time the Constitution was drafted, private gun ownership was considered to be an indisputable right by the Founding Fathers and their fellow countrymen.

“This may be a very foreign concept, but the first fight over the Second Amendment wasn’t over whether the population should be armed. All the framers agreed with that,” Swann said. “The fight was between Federalists and Anti-Federalists over whether we would have a standing army.”

An army is necessary to protect its citizens, but both Federalists and Anti-Federalists were worried that if a government were to become militarized, nothing would keep it from growing too strong and eventually becoming tyrannical.

Thus, the Second Amendment has provisions for both a well-regulated militia, which consisted of pretty much every male with a pulse, and the right for private citizens to bear arms, which appeased both the Federalists and Anti-Federalists.

“It was written by men who ultimately believed that governments and armies would turn on their own people,” Swann said. “The Second Amendment was written to guarantee that would never happen.”

You can read a transcript of the full segment here. 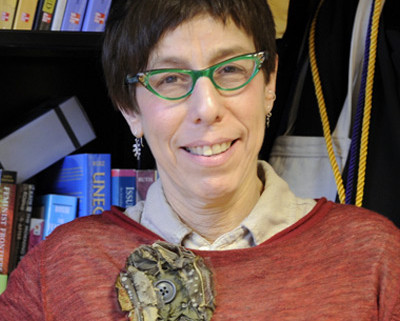 On Fox New’s “The O’Reilly Factor,” correspondent Jesse Watters often goes to college towns, microphone in hand, to document the airy ignorance of some college students. Now we know it’s not really their fault.

“I urge President Obama to ban firearm possession in America,” a college professor wrote in the Rochester (New York) Democrat & Chronicle. “He is the president of the United States. He can change the country. He can do it today. I believe in him.”

That’s Barbara LeSavoy, director of Women and Gender Studies at The College at Brockport. You’d think she would know something about the U.S. Constitution and the way the country works. But alas, she seems pretty clueless.

“Today, I write this letter with a bleeding heart,” she states. “I admire Obama. But he has let me down. I am disappointed because his presidency could have done more for our country, and sadly, the many taken lives who cannot read this essay. I still worry about urgent social tensions facing our nation, and I recognize their ongoing complexities in policy and legislative action. But gun violence can be averted.”

How? It seems pretty simple to her.

“Firearm possession should be banned in America; President Obama can orchestrate this directive,” she wrote. “His presidency can be remembered as a remarkable turn in United States history where a progressive leader forever changed the landscape under which we live and work. This is his legacy. To establish gun control laws in America that will reduce high levels of male violence and usher in a culture of peace and civility.”

No, President Obama doesn’t have that power. What’s standing in his way isn’t political meekness, as professor LeSavoy implies, but the Second Amendment.

As the U.S. Supreme Court held in the Heller decision in 2008, “The Second Amendment protects an individual right to possess a firearm unconnected with service in a militia, and to use that arm for traditionally lawful purposes, such as self-defense within the home.”

Professor LeSavoy’s letter doesn’t make it clear how she thinks the government should go about collecting all those guns she wants the president to ban. But any such effort would be disastrous.

As The Federalist’s Varad Mehta noted, “Let there be no doubt. Gun confiscation would have to be administered by force of arms. I do not expect that those who dismissed their fellow citizens for clinging bitterly to their guns are so naive that they imagine these people will suddenly cease their bitter clinging when some nice young man knocks on their door and says, ‘Hello, I’m from the government and I’m here to take your guns.’”

It would be needlessly cruel to quote much more of professor LeSavoy’s letter, although this sentence pretty much sums it up: “During (Obama’s) 2008 presidential campaign, my two daughters, partner, and I ate every meal in our house on Obama placemats.”

The point here is that professor LeSavoy is a celebrated scholar and thought-leader in academia. So maybe we should give college students a break. It’s not their fault.