The Connecticut Supreme Court has reversed the conviction of a man who was found to have war memorabilia in his car, including a dirk knife and a police baton, while he was moving from one residence to another.

The non-profit advocacy group Knife Rights said the decision affirmed knives are arms protected by the Second Amendment in a case with potential wider implications.

The case centered on the transportation of Jason DeCiccio’s weapons collection, including knives, in his move from Connecticut to a rental in Bolton, Massachusetts, where he was to take a job as a claims processor at the Veterans Administration.

“The defendant originally was convicted for having a weapon in a motor vehicle, a violation of Connecticut’s harsh anti-weapons laws,” Knife Rights said.

But the court noted the Second Amendment “protects the defendant’s right to possess the dirk knife – in his home and, second, that the statute’s complete ban on transporting those items between residences unduly burdens that right.”

The court said the “safe transportation of weapons protected by the Second Amendment is an essential corollary of the right to possess them in the home for self-defense when such transportation is necessary to effectuate that right.”

DeCiccio was injured in a traffic accident and taken to a hospital, where he became “disoriented and combative.”

During the police officers’ processing of the vehicle, they found two machetes, a sword, a couple of smaller knives and a police baton.

DeCiccio was charged with six counts of having a weapon in a vehicle and was acquitted on four counts. Convictions followed on his possession of a baton and a dirk, a small knife like a dagger, with a straight blade.

He appealed, and the Connecticut Supreme Court unanimously wrote: “The defendant has established, therefore, that his conviction under [Paragraph] 29-38 (a) for using his Jeep to transport a dirk knife and police baton to his new residence violated his Second Amendment right to keep and bear arms.”

NPR affiliate WSHU reported DeCiccio’s attorney, Michael Zariphes, said the decision was welcome but would not compensate DeCiccio for the last four years, including the 15 months he was in jail.

“His life was essentially put on hold,” the attorney told the station. “Which is a shame because he is a man who served in the military and put his life on the line to protect the very Constitution that sort of put him in jail.”

Citing both the Heller and McDonald decisions by the U.S. Supreme Court, which affirmed that individual Americans have the right to keep and bear arms, the court said: “Well after the nation’s founding, knives continued to be an important tool for many Amerians soldiers. During World War II, American soldiers, sailors, and airmen wanted and purchased fixed blade knives, often of considerable dimensions. At least in some units, soldiers were ‘authorized an M3 trench knife, but many carried a favorite hunting knife.’ The Marine Corps issued the Ka-Bar fighting knife. As one World War II memoir records, ‘this deadly piece of cutlery was manufactured by the company bearing its name.’ … Vietnam memoirs record that Ka-Bar and similar knives were still in use.

“We agree with the defendant that, under Heller, the dirk knife that he was transporting to his new residence falls within the terms ‘arms’ for purposes of the Second Amendment.”

Likewise, the baton also fits the definition under the Constitution.

“We are persuaded that the police baton that the defendant had in his vehicle is the kind of weapon traditionally used by the state for public safety purposes and is neither so dangerous nor so unusual as to fall outside the purview of the Second Amendment’s right to keep and bear arms.”
(H/T: WND) 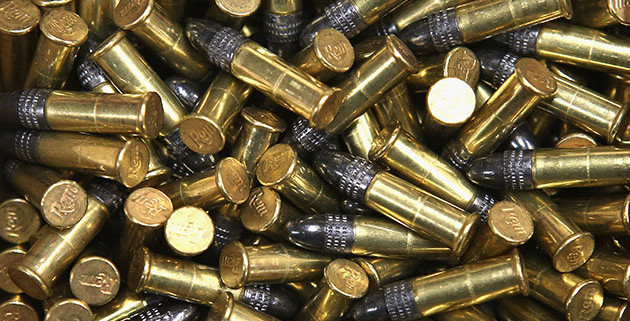 WASHINGTON (AP) — A federal appeals court has ruled against environmentalists who are trying to force the Environmental Protection Agency to regulate spent lead bullets and lead shot used in hunting and shooting sports.

In a decision favorable to gun enthusiasts, the U.S. District Court of Appeals for the District of Columbia Circuit said Tuesday that environmental groups have suggested no way in which EPA could regulate spent lead bullets and shot without also regulating cartridges and shells.

The National Rifle Association and much of the pro-gun lobby intervened on the EPA’s side in urging the federal appeals court to uphold the dismissal of a lawsuit by 101 environmentalist organizations.

“Given that bullets and shot can become spent only if they are first contained in a cartridge or shell and then fired from a weapon,” the environmental groups “have identified no way in which EPA could regulate spent bullets and shot without also regulating cartridges and shells,” precisely what the law prohibits, said the decision by appeals judge David Tatel, a nominee of President Bill Clinton. The other two judges on the case were Patricia Millett and Cornelia Pillard, both nominees of President Barack Obama.

More than 50 million hunters and target shooters in America use traditional ammunition containing lead components, according to pro-gun groups. Ninety-five percent of domestically manufactured ammunition is made with lead bullets or lead shotgun shells.

Lawyers for the environmentalists say there are many effective alternatives, such as substituting copper for lead bullets and lead shot.

At least six states have issued warnings about lead bullets and the risks for pregnant women and children.

Chris W. Cox, President of the NRA Freedom Action Foundation announced the kickoff of the NRA Trigger the Vote campaign.  Cox states in an email to supporters: “Registering to vote is critical to preserving our Second Amendment rights.”

Cox further explains: “One of the missions of NRA’s Freedom Action Foundation is to protect the Second Amendment through a vigorous non-partisan voter registration program.”

It features a father taking out a small pistol safe from a closet and tells his son “Remember, this isn’t a toy. This is serious business.

The son asks his father why he has one, the dad responds, “To protect our family and our rights.”

The father opens the safe and reveals a voter registration card.

An interesting twist on citizen’s responsibility to act and to act responsibly when handling a firearm or voting.